Because Curlers Can Pull Muscles, Too 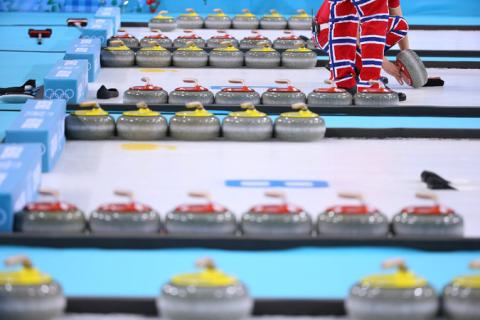 Among the things that a curling team would not seem to need, an official athletic trainer might rank with a beach umbrella and a maid to sweep up after the athletes. But here is Brian McWilliams, a certified athletic trainer, on hand to treat any injury that might befall an American curler. He knows what you are thinking. “I get that all the time: ‘What injuries do they have?’ ” McWilliams said. “You know, it looks so simple. But it’s really a unique and difficult sport.” There are certainly events at these Winter Games that require sophisticated medical assistance. Athletes have sustained severe injuries in violent crashes in slopestyle skiing and moguls, and danger looms over the sliding sports like luge because of the speeds attained. Curling? Less so. The United States and Britain are the only delegations here with trainers devoted solely to their curling teams. The Canadian team, a longtime powerhouse in the sport, relies on staff shared with other athletes, and the Russian team enjoys home-court access to a variety of medical and training professionals. Maggie Bush, the physiotherapist for Britain’s curlers, described it as a “dream job.” A Scot who hails from generations of curlers, Bush moved from working with dancers and performers in London’s West End to curlers after moving back to Scotland in 2007. “There’s a lot of similarities,” Bush said of curling and dancing. “A lot of the stuff we try to work with dancers was obviously trying to make them technically good at what they are doing, and that’s the same of the work we were doing with the curlers.” Among her duties is monitoring the athletes and their muscles to examine patterns in soreness, which has proved effective in reducing injuries, she said. Bush said that if specific muscles get tight, it is harder to slide well and may increase the chance of injury. McWilliams, who is based in Green Bay, Wis., accompanies the United States team on most of its international competitions. Among his responsibilities: making sure any medication used by one of the curlers does not violate the antidoping code. McWilliams became the team’s physical therapist through his training with the United States Olympic Committee. He had worked with a variety of athletes at the training facility in Chula Vista, Calif., including race walkers, sprinters, soccer players, rowers and some combat athletes in wrestling and martial arts. In late 2005, he was asked by the committee if he would like to join the team as it headed for the 2006 Winter Games in Turin, Italy. McWilliams, a triathlete, agreed. Then he was told that he was assigned to curling — it was the first time the team would have its own athletic trainer. “I said, ‘What the heck is curling?’ ” McWilliams recalled. He immersed himself in the sport and now considers himself an expert in all things brooms and bonspiels. He is paid through a small daily stipend, but he began as a volunteer with USA Curling. Sweeping, he says, can be difficult on the upper arms, back and shoulders. Backs ache from being bent over so much. Athletes are in better shape, he said, than when he started, creating a greater demand for massages after a workout. A massage therapist will assist McWilliams. “The sliding itself is a unique position they have to be in,” he said. “You have a lot of effects from sliding. I tell people sometimes it’s like golf. If you swing the same way in repetition, you’re going to have the same issues.” Jessica Schultz, a member of the American women’s team, said pain in the hips, shoulders and neck was common. When she is not curling, Schultz works as a physical therapist assistant. “They put me to work sometimes on the team,” she said. Knees, too, are a common source of pain, mostly from the kneeling that the skip does when throwing the stone, McWilliams said. But this is not football, or slopestyle skiing. In his eight years of curling work, McWilliams said, he has never had to step on the field of play to assist an injured athlete. “I typically don’t have to worry about concussions,” he said. Nor does he have to deal with the other common plague of many Olympic sports: doping. “But it’s such a finesse and touch sport,” McWilliams said. “In a sport like cycling, you worry about EPO use. We typically don’t have those issues in curling,” he said, referring to erythropoietin. The bigger concern for McWilliams is hangovers. Curling tradition dictates that the winning team buy the losers a round of drinks once the competitors put down their brooms and leave the ice. Though postgame revelry at the Olympics may be muted, McWilliams said he was ready. “The teams like to have a good time,” he said. To read the original article, please click the following link:  http://nyti.ms/1kHBX4E