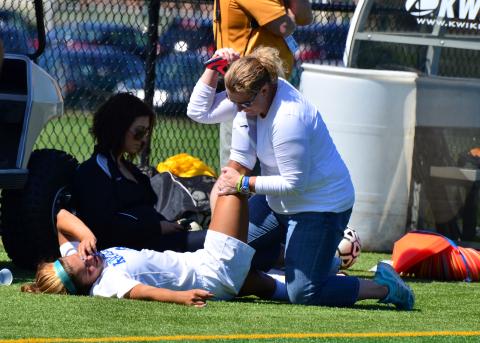 On April 28, 2015, Laura Friedman was preparing for a lacrosse game at Scotch Plains-Fanwood High School like she would any other game. Laura, the school’s Athletic Trainer, was conferring with her coaches at mid field while the team warmed up for their game when she saw a group of people moving quickly in the stands. Upon scanning the area, Laura noticed a gentleman lying supine on the ground near the bleachers. Without hesitation she and the 3 lacrosse coaches ran to the area.                 As they reached the location Laura threw her cell phone to a coach and had him call 911. Laura then hopped the fence and knelt next to the man’s head. There was another person knelt next to the man as well – the victims son-in-law, who happened to be an Orthopedist. Laura then sent the site supervisor to open the gate and direct the ambulance to their location upon its arrival at the scene. The ambulance would not arrive in a timely manner as there was a fire at a local gas station that required the attention of Emergency Medical Personnel.  The victim was the grandfather of a senior lacrosse player who was at the game celebrating Senior Day.                 Once next to the victim, Laura checked for a pulse and found there was none. The Orthopedist began chest compressions as Laura adjusted the man’s head and opened his airway. The Automated External Defibrillator (AED) was en route from the sideline of the lacrosse field. When the AED arrived, Laura exposed the patient’s chest and applied the pads. The pads were placed to avoid the man’s internal defibrillator which was not working properly. The AED analyzed his heart rhythm and advised for a shock. Before delivering the shock, Laura noticed that the man’s hand was touching the chain link fence. She moved the hand and the shock was delivered. CPR was continued as Laura continued to monitor for a pulse. After 2 minutes of CPR, the AED analyzed the heart rhythm again. This time there was no shock advised and the patient had some labored breathing. This continued for another cycle of CPR and it was at this time the rescue squad arrived at the scene.                 At this time the EMT switched in to continue CPR and the next time the AED analyzed the heart rhythm a shock was advised. After the shock was delivered Laura again checked for a pulse. The man now had a pulse and was beginning to breathe. He was then transferred onto a stretcher and transported by the EMTs to a local hospital for further treatment. The man was placed into a medically induced coma for 2 days. After awakening from the coma he stayed in the hospital for an additional 11 days. During that time, doctors found an issue with the wiring of his internal defibrillator. The man is now released from the hospital and doing well on his road to recovery!                 “The emergency action plan we had in place was so very important.” Says Friedman. “Without a plan in place, chaos and/or confusion can occur. This was not the case as we practice the emergency action plan before the season begins.”                 Friedman adds, “Athletic Trainers do our jobs daily. Our ability to stay calm during emergencies is possible due to the smaller emergencies we deal with on a daily basis. Our knowledge and training is paramount in continuing to care for others the way we do.”                 Mr. Ryan Miller, Athletic Director at Scotch Plains-Fanwood High School added, “While SPFHS was a little ahead of Janet's Law in purchasing and AED for the Athletic Trainer - having an experienced professional like Laura Friedman made the emergency planning process work.  Clearly, we felt prepared and while we are thrilled the plan worked, we are sad that we had to implement it.  Moreover, there is nothing more important than having a competent, reliable, calm, and confident Athletic Trainer on site.  I have always been proud of the work Laura performed for SPFHS, and I could not be more proud of her swift and stellar actions to control the site prior to the arrival of the EMT's as well as her follow-up with all involved.  Laura properly checked on the family and took time to ask about the emotional status of the SPFHS employees - stating she was there to guide them to the right place for emotional help.” The ATSNJ would like to congratulate Laura Friedman and all those involved on a job well done!